The National Antiquities Recovery Committee, held a meeting on Sunday chaired by Minister of Tourism and Antiquities, Khaled al-Anany in the presence of former Minister of Antiquities, representatives of the Ministries of Foreign Affairs and Justice, and the Public Prosecution, Zahi Hawass, to discuss the latest developments regarding the recovery of antiquities. During the meeting, the latest developments in investigations conducted by the French authorities with the former head of the Louvre Museum in Paris were discussed. Investigators suspect that the former president of the Louvre Museum, Jean-Luc Martinez, turned a blind eye to forging certificates of origin for five ancient Egyptian artifacts. While the Louvre Museum refused to comment on the situation or make any statements. Martinez served as president of the Louvre Museum for eight years until 2021, as well as served as an ambassador for international cooperation in the field of cultural heritage. Meeting of Egyptian and Malawian ministers of health in Cairo on June 5, 2022. Press PhotoCAIRO – 6 June 2022: Acting Minister of Health and Population Khaled Abdel Ghaffar met Monday with his Malawian counterpart in Cairo expressing readiness to provide medical treatment to the patients of the fellow African state in Egypt. The Egyptian ambassador to Malawi delivered in March a shipment of aid to help alleviate the impact of Hurricane Ana. Ambassador Mohamed Al-Sherif handed over the shipment of drugs and medical equipment to the Malawian Minister of Health Khumbizi Chiponda in the capital of Lilongwe and a group of officials. She also applauded medical training delivered by Egypt to Malawian health workers as part of the cooperation between the two African nations. Insulting remarks against Prophet Muhammad is "the very definition of terrorism": Al Azhar

CAIRO – 6 June 2022: Egypt's top Islamic authority, Al-Azhar, has vehemently denounced the derogatory remarks made by spokeswoman of India's ruling Bharatiya Janata Party (BJP) on his Twitter account against the Prophet Muhammad (PBUH) and his wife Aisha. In a statement, Al-Azhar said that such remarks expose a conspicuous ignorance of the history of prophets and messengers who represent the epitome of sublime manners and high morals. "This act by an irresponsible ignoramus is the very definition of terrorism," Al-Azhar said, warning that such act "may plunge the entire word in disastrous crises and grinding wars." Urging the international community to take decisive action against such abusers, Al-Azhar deplored the desperate attempts by some of the politicians who resort to anti-Islamic rhetoric for electoral support. The "civilized world" must be on the alert for those who exploit people's faith and supreme human values for political or electoral gain, Al-Azhar noted. Rumours that the 'king of clay' was making his final appearance at Roland Garros kept circulating during the past fortnight. Despite all the trials and tribulations he suffered in the build-up, no one could prevent Nadal from lifting the Musketeers' Cup for a record-extending 14th time. The win means Nadal is now halfway through the calendar Grand Slam for the first time in his career after also winning the year's opening major at the Australian Open. OLDEST CHAMPIONNadal passed fellow Spaniard Andres Gimeno as the oldest Roland Garros men's singles champion. The Norwegian soon broke Nadal to love to take a lead for the first time in the match. CAIRO, 6 June 2022: Egypt's national team achieved an important 1-0 victory over Guinea scored by Mostafa Mohamed in the 85th minute of the match that brought the two teams together in the first round of qualifiers for the 2023 African Nations Cup in Cote d'Ivoire, which was held at Cairo Stadium. The match started with a threat from the Guinea national team through Liverpool player Naby Keita in the 2nd minute of the match with a shot that came next to Egypt goalkeeper Mohamed Abu Gabal. The Guinean team continued to put pressure on Egypt, and succeeded in obtaining a direct kick in a dangerous area in the 7th minute, but it did not represent an explicit threat to the team's goal. Egypt tried to score a goal before the end of the match, but the Guinean team might surprise the team by scoring a goal in the 82nd minute after a sudden shot, but it passed near Abu Jabal's goal. And in the 85th minute witnessed the goal of progress for the Egyptian team by Mostafa Mohamed after an organized attack, Mohamed Magdy Afsha started with Ayman Ashraf. The Somabay Effervescence: Another Successful Edition of Somabay Endurance Festival Egypt faces Guinea in their first match of 2023 AFCON Qualifiers CAIRO – 5 June 2022: Juan Goytisolo Gay was a Spanish thinker, writer and orientalist, known for his love of Arabic language and culture. Many intellectuals considered him the greatest Spanish writer in the modern era, and others considered him one of the greatest writers in Spanish history since its inception. Juan Goytisolo Gay enrolled in law school but soon dropped out. He worked in Paris in several magazines and worked as a literary consultant in a printing press and as a professor at Jolla Universities in California. He was sentenced in absentia to imprisonment and was forbidden from returning to his country until after the departure of General Franco. WHO Director-General Tedros Adhanom commended in a recorded speech Egypt’s 100 Healthy Lives Initiative, which has almost eradicated hepatitis C from Egypt. Minister Abdel Ghaffar noted that Egypt has implemented 11 presidential initiatives pertinent to health, and that have had as beneficiaries 86 million citizens. Speaking of Africa, Minister Abdel Ghaffar underlined that less than two percent of drugs consumed in Africa are produced on the continent, although it composes 16.7 percent of the world population. To improve healthcare in Africa, the minister proposes working on three dimensions simultaneously and that are infrastructure, healthcare workers, and healthcare services. Cardio Alex, which is a conference focusing on heart diseases, will be held in Alexandria on June 7-9 to complement Africa Health ExCon, which will conclude Tuesday. CAIRO – 5 June 2022: President Abdel Fatah al-Sisi announced Sunday at the first edition of Africa Health ExCon that Egypt would supply fellow African states with 30 million doses of anti-COVID-19 vaccines. That is in light of the country's selection early in 2022 as one of six African states that would receive the the mRNA technology used in the manufacturing of vaccines and other medical drugs necessary to confront many incurable diseases. Yet, the country implemented programs for water recycling, desalination, and rainwater harvesting, "and we are surviving," the president pointed out. The Egyptian president thanked pharmaceuticals companies for cooperating with Egypt in dealing with many diseases. They knew that their investments would not be subject to vandalism or destruction," President Sisi underscored, warning against the economic harm incurred by instability and security issues. CAIRO – 4 June 2022: Giza Criminal Court has sentenced Karim El-Hawary, son of a prominent businessman, to three years in prison for killing four while driving at an excessive speed under the influence in Sheikh Zayed city. He has been also accused of possessing cocaine for personal use. Surveillance cameras in the scene of the incident showed Hawary while driving his car at a very high speed and hitting another car from behind. Most of the victims were below 18 years of age. In March, two lawyers of Hawary were sentenced to six years in prison over attempting to illegally obtain and spoil the CCTV footage that recorded the high-profile car accident while pretending to be prosecutors. 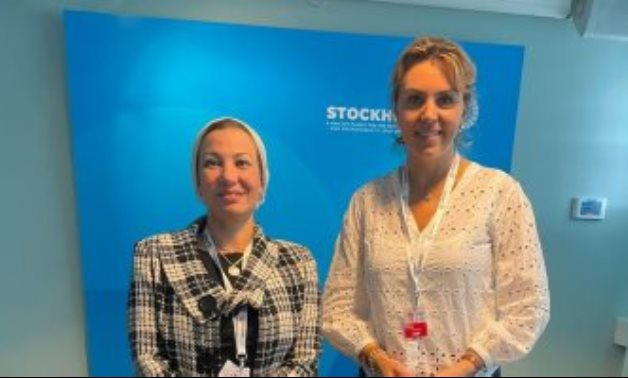 At Stockholm +50 Conference, which is organized by the United Nations General Assembly in Sweden, the two sides mulled integration of environmental work with the energy and water sectors. She further added that an ambitious target was set for 50 percent of the country's projects to be green by 2024 and 100 percent by 2030. The Egyptian Environment Minister also said that Egypt hopes the COP27 will achieve the aspirations of nations in addressing the effects of climate change and working to implement the decisions of the UN Climate Change Conference in Glasgow (COP26). Green bonds have also been launched, which focus on projects to address the effects of climate change, such as transportation and sanitation projects, explaining the work to provide profitable projects in this regard, such as new energy projects. Fouad reviewed the Egyptian vision in the transition towards new and renewable energy, linking it to the issues of water desalination and activating the participation of the private sector in environmental projects, especially the energy field. Reuters - Harry Kane is determined to break Wayne Rooney's England goal-scoring record before this year's World Cup finals in Qatar, but the Tottenham Hotspur striker said the team's performance would always take precedence over his pursuit of personal landmarks. England play Italy and Germany again in September. Kane, who was on the pitch against Switzerland in 2015 when Rooney bettered the previous best of 49 goals set by Bobby Charlton, added the significance of the accomplishment wasn't lost on him. I was lucky enough to be playing on the pitch and actually scored when Wayne broke the record himself," he said. England next travel to Munich, where they will face Germany on Tuesday. Google is honoring the iconic Egyptian actor Mahmoud Abdel Aziz with a Google Doodle to celebrate the legendary actor birthday. Mahmoud Abdel Aziz is one of a kind actor who has a unique style. Abdel Aziz was born in Wardeyan neighborhood in Alexandria on June 4, 1946, to a middle class family. Through his performance in this series, Abdel Aziz captured millions of TV viewers’ attention and hearts in Egypt and the Arab World. These veteran directors managed to discover new areas in Abdel Aziz's performance; thus were able to shine his talent.