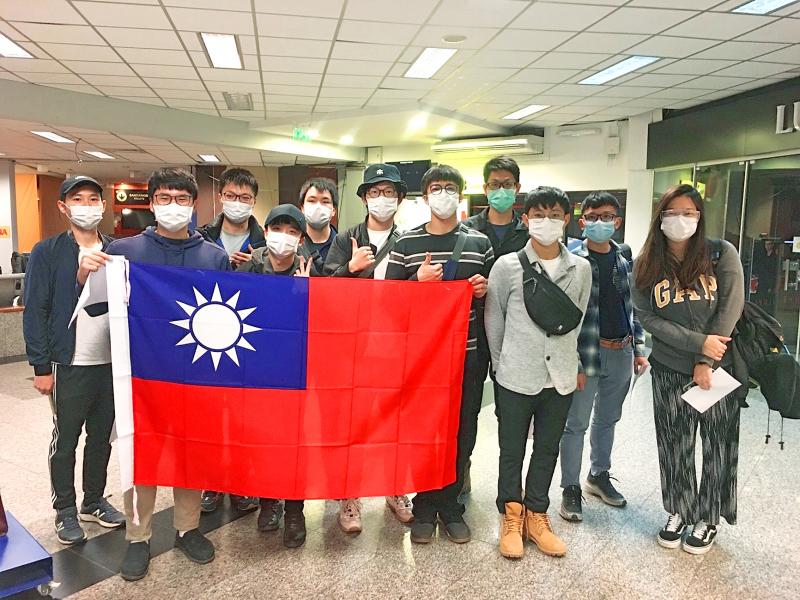 Virus Outbreak: MOFA thanks Paraguay, US for evacuation help The Taiwan Garrison Command, a secret police body, had reportedly questioned him for more than 12 hours the day before. From left, Transitional Justice Commission member Yeh Hung-ling, commission Acting Chairwoman Yang Tsui and defense attorney Greg Yo attend a news conference in Taipei yesterday. It added that the government had obstructed Chen’s family in their search for the truth. Citing friends of Chen, Yo said that someone attempted to push Chen out of the bus in front of the vehicle. At the time of Chen’s death, police had said that he was taken for questioning from 9pm to 9:30pm on the evening before his death and then driven home, Yo said.

Virus Outbreak: Taiwan produces high-quality medical gear to help world fight virus: ministryBy Shelley Shan / Staff reporterTaiwan is manufacturing certified and high-quality products to help combat the COVID-19 pandemic worldwide, the Ministry of Economic Affairs said yesterday, adding that many of the products have also secured certification in other countries. “The nation provides certified and effective disease-prevention products to the world. The bureau announced the launch of a virtual healthcare pavilion on the Taiwan External Trade Development Council’s (TAITRA) Web site (http://anti-epidemic.taiwantrade.com). Taiwan can export disease-prevention products, because the products and the facilities they are manufactured in meet health certification standards at home and in destination countries, Chen said. “As the world combats the spread of COVID-19, we want to contribute to the world by engaging in free trade. Famed cardiologist loses five family members in blazeBy Chen Wen-chan and Fang Wen-hsien / Staff reportersFamed cardiologist Lai Wen-de (賴文德), the former director of Kaohsiung Medical University Chung-Ho Memorial Hospital, and his wife survived a fire yesterday in their five-story home in Kaohsiung, but their daughter, son-in-law and three grandchildren died in the blaze. Firefighters heard Lai and his wife crying for help from the third floor and were able to rescue them, it said. A Kaohsiung firefighter in a cherrypicker basket tries to reach an upper story of the residence of cardiologist Lai Wen-de and his family yesterday morning. Lai Wei-an was a doctor at Kaohsiung Chang Gung Memorial Hospital, while her husband was a physician in Jiann Ren Hospital’s family medicine department. Lai Wen-de, had served as Presidential Office Secretary-General Chen Chu’s (陳菊) attending physician after she suffered a mild stroke in 2007 while she was Kaohsiung mayor. Virus Outbreak: Masks greatly limit spread: CECCPLAYING THE ODDS: A CECC official said that if healthy and infected people are wearing masks, their risk of viral transmission is reduced to about 1 to 2 percentBy Lee I-chia / Staff reporterWearing masks greatly reduces the risk of spreading COVID-19, Central Epidemic Command Center (CECC) specialist advisory panel convener Chang Shan-chwen (張上淳) said. “Many people have asked why several confirmed cases in Taiwan did not spread the virus to other people,” Chang said, pointing to an illustration depicting a healthy person and an infected person interacting in possible scenarios. Taiwan reported zero cases for six consecutive days ending on Friday, with three cases reported on Saturday. The numbers of daily confirmed cases indicate a similar trend, showing that the peak of reported cases was in mid-March, he said. Doctors’ clinical diagnoses of the first 100 confirmed cases show that the two most common symptoms were fever and coughing, he said. 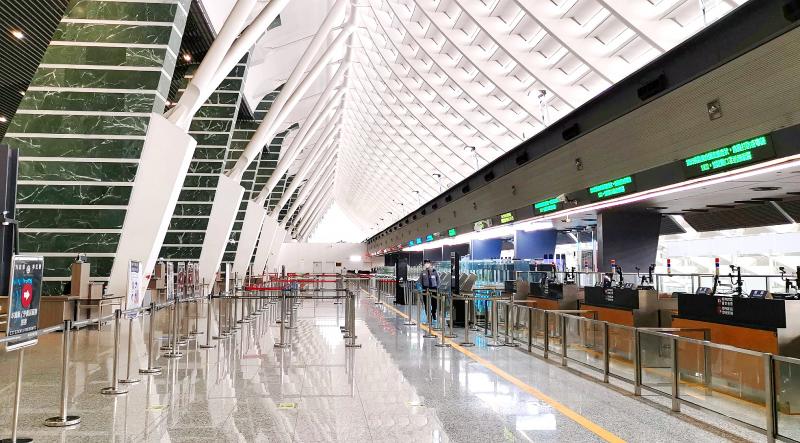 Railway Police Bureau officer Lee Cheng-han (李承翰) was stabbed to death by a man surnamed Cheng (鄭) on July 3 last year. The front entrance of the Chiayi District Court in Chiayi County is pictured on Oct. 11 last year. Photo: Ting Wei-chieh, Taipei TimesThe Chiayi District Court on April 30 found Cheng not guilty in the case’s first ruling, as he was diagnosed with schizophrenia. It ruled that he could be released on NT$500,000 bail and was ordered go undergo mental health treatment for five years. The judiciary made the utmost effort to consider evidence from both sides equally and to seek the truth, it said. Students wear masks and have their body temperatures taken yesterday before entering the Taipei venue where they will take the Technological and Vocational Education Entrace Examination. Photo: Chien Jung-fong, Taipei TimesThe findings indicated that the infection rate was higher among contacts whose exposure to index cases started within five days of the onset of symptoms than those who were exposed later. Contacts with exclusive pre-symptomatic exposure were also at risk, the paper said. The infection rate was higher among household and non-household family contacts than in healthcare or other settings, the paper said, adding that the rate was also higher among those aged 40 or older. “We can now make the judgement that a few days before and a week after the onset of symptoms is the period of highest transmission for COVID-19,” Cheng said. KMT bills aim to amend Criminal CodePUBLIC SAFETY: Wan Mei-ling said that lengthy compulsory treatment would deter people from ‘faking a mental illness’ to avoid stiff punishment for crimes they commitBy Chen Yun / Staff reporterChinese Nationalist Party (KMT) Legislator Wan Mei-ling (萬美玲) yesterday said that she would sponsor a bill to amend the Criminal Code to mandate that people with mental disorders who have committed a felony undergo compulsory treatment for five to 10 years. On Friday, KMT Legislator Yeh Yu-lan (葉毓蘭) sponsored a draft amendment to the Criminal Code seeking to increase penalties for people who commit homicide, bodily harm or grievous bodily harm against law enforcement or medical personnel. Penalties for obstructing official duties stipulated in the Criminal Code and the Medical Care Act (醫療法) are too lenient and ineffective at protecting police and medical personnel from violence, she said. Article 271 of the Criminal Code stipulates that people who have committed homicide should receive a prison term of at least 10 years, life imprisonment or the death penalty, while those guilty of attempted murder face a prison term of up to two years. Article 278 of the Criminal Code stipulates that people who inflict grievous bodily harm on others face a prison term of between five and 12 years, while those who inflict grievous bodily harm that results in death face a prison term of at least 10 years or life imprisonment. Virus Outbreak: Three new cases end six-day streakTAKE PRECAUTIONS: Minister of Health and Welfare Chen Shih-chung said it would be unacceptable if local cases occur because people stop protection measuresBy Lee I-chia / Staff reporterThe Central Epidemic Command Center (CECC) yesterday reported three new imported cases of COVID-19, marking the end of six consecutive days with zero cases confirmed in Taiwan. Of the nation’s 432 confirmed cases, 324 have left isolation after being treated, he said. Health authorities can handle the treatment and contact tracing for sporatic cases, Chen said. “However, it is unacceptable if local infections occur because people fail to perform personal protection measures. The center’s decisions about easing disease prevention regulations would be based on whether people are practicing personal protection measures, not on how many consecutive days of no domestic cases have passed, he added. Virus Outbreak: Record 922 firms furlough staff amid slowdown: ministryStaff writer, with CNAMore than 900 companies had furloughed employees as of the end of last month, an indication that the economic effects of the COVID-19 pandemic continue to hurt local businesses, especially smaller ones, Ministry of Labor data showed. Ministry of Labor statistics released on Friday showed that 18,840 workers from 922 companies have been placed on unpaid leave, an increase of 575 workers from 118 companies from a week earlier. Larger firms have been less likely to put employees on temporary leave because of subsidies received from the government, Huang said. The manufacturing sector had 6,501 workers on unpaid leave, the most of any sector over the past week, ministry data showed. The hospitality sector followed with 4,304 employees on temporary leave, while the retail and wholesale sector had 3,645 workers furloughed and the supportive services sector had 1,332. Same-sex unions top 3,500 in year since legalizationStaff writer, with CNATaiwan recorded more than 3,500 same-sex marriages as of the end of March, nearly one year after legislation legalizing same-sex marriage took effect, the Ministry of the Interior said on Friday. A total of 3,553 same-sex couples had registered their marriages as of the end of March, with New Taipei City recording the largest number of same-sex unions among the nation’s six special municipalities at 722, ministry data showed. Of the 3,553 same-sex marriages, 1,122 were male couples and 2,431 were female. After New Taipei City, Taipei was second with 582 same-sex unions, followed by Kaohsiung with 473, Taichung with 423, Taoyuan with 347 and Tainan with 234, it said. Outside of the six special municipalities, Pingtung County took first place with 110 same-sex unions, followed by Hsinchu City with 85, and Hsinchu County and Hualien County with 84 each, the data showed. The building is to be converted into a memorial for Tai after a motion to preserve it was on Friday unanimously passed by the department’s 17-member cultural heritage committee. The building, which is on property owned by National Taiwan University (NTU), where Tai was a faculty member, would not be quietly destroyed by the school, NTU president Kuan Chung-ming (管中閔) told a news conference at the school to allay public concerns. Tai originally lived in another Japanese-style building on the campus, but was later required to move for administrative purposes. However, the original building Tai lived in has already been demolished, the university said. Tai’s former residence is not only a building, but an asset belonging to all Taiwanese, an NTU Student Association representative told the cultural heritage committee meeting. Bill seeks to close citizenship loopholeENHANCED SECURITY: The proposed amendment would require Chinese citizens to present proof of having renounced their citizenship to obtain permanent residenceBy Sean Lin / Staff reporterA proposed legal amendment to close a three-month gap between Chinese citizens becoming naturalized Republic of China (ROC) citizens and renouncing their Chinese citizenship yesterday proceeded to committee review. The proposal, sponsored by Democratic Progressive Party legislators Wu Ping-jui (吳秉叡) and Lin I-chin (林宜瑾), seeks to amend Article 17 of the Act Governing Relations Between the People of the Taiwan Area and the Mainland Area (台灣地區與大陸地區人民關係條例) by prohibiting Chinese citizens from obtaining ROC citizenship before they have provided documentation proving that they have renounced their Chinese citizenship. The grace period creates a loophole in which some Chinese have dual nationality and dual household registration, resulting in a breach in the nation’s border controls, the lawmakers said. Although rules are already in place to prevent people with dual nationality from serving as publicly elected delegates, the act remains at odds with the Civil Service Employment Act (公務人員任用法), resulting in Constitutional Interpretation No. 768, which states that people with dual nationality must not work as government-contracted physicians, Ho said.

The Chiayi District Court on Thursday found Cheng not guilty of murder because of his mental state and set bail at NT$500,000. The High Court yesterday ordered the district court to hold another bail hearing, in which prosecutors argued that Cheng should remain incarcerated. National Police Agency Director-General Chen Ja-chin, second right, visits the Railway Police Bureau’s Taipei Station at Taipei Railway Station yesterday. He still poses a danger to the public,” Chiayi District Prosecutors’ Office Chief Prosecutor Tsai Ying-chun (蔡英俊) said on Thursday. They asked the High Court to give Cheng at least a life term to keep him out of society.